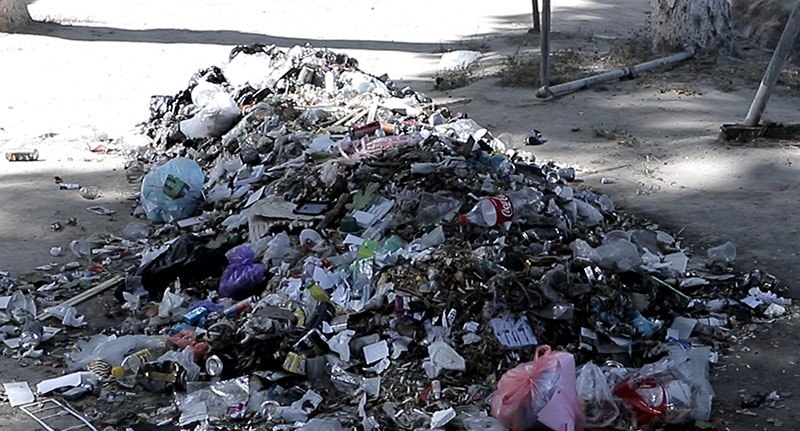 Tashkent without garbage bins: why are streets full of garbage?

Walking along the central streets of Tashkent, you can feel the clean, tidy, true capital of the capital. However, garbage collection is common in marginal areas and in crowded areas. After observing several areas of the city, we saw that the streets were being turned into garbage dumps, simply because of the lack of waste boxes.

The Cabinet of Ministers of the Republic of Uzbekistan “On Measures for Further Increasing Efficiency in the Area of ​​Waste Management” establishes a mandatory procedure for disposing of waste dumps on the territory for individuals and legal entities. That is:

on the entrance to the apartment block - 1;

1/1 access to / from the premises of organizations, regardless of their legal and organizational forms;

2 for each entry / exit subway, underground and overpass;

for cultural and domestic needs and recreation facilities (parks and forests, forest areas, parks, boulevards, squares, etc.) - not less than 1 meter per 800 m2 of the facility and not more than 40 meters apart from the sidewalks and sidewalks at a distance;

at markets and trade facilities (supermarkets, hypermarkets, etc.) - 1 in every 250 m2 of the site and in line with shops - not more than 10 meters from each other;

on access / exit to the parking areas of parking lots and vehicles - 1-2 units;

in the yard of medical facilities - 1 in each 700 m2 of the object, and in the main aisles - not more than 10 meters from each other;

in recreational areas adjacent to beaches and water aquacultures (rivers, lakes, bays or pools) - 1 m each 800 m2, with the location of 15 m from the water distribution and 3-5 m from the green vegetation;

There should be 1 litter box for every 100 meters in areas with crowded apartments and in central squares, sidewalks and sidewalks, as well as on bridges - in areas with high traffic intensity - not more than 50 meters and in less crowded areas. Required.

However, in the densely populated and crowded areas, bins are not found every 50 meters and every 100-120 meters. There are only 1-2 boxes in the entire large market. It should come as no surprise that ditches are not water, but waste water. These not only undermine the appearance of the city, but also serious anti-sanitation.

One of the cleaners around the Chilonzor subway says one of the bazaar vendors is using boxes at the stalls because there are no waste bins in the nearby market.

Only bazaar traders use boxes set up at the stations. In the first half of the day, the box is filled and thrown away. It is obvious that temporary passengers leave their trash on the floor, where they are encountered. We will not have time to empty the boxes. How often we complain is useless. They will also release their cardboard and shells here, ”said a Chilanzar district improvement service official who wants to remain anonymous.

In the same area near the Chilanzar metro station, a considerable amount of garbage was formed in the visible part of the street. According to a complaint from nearby vendors, every day this spa is picked up by the Mahsustrans. However, due to the fact that there is no garbage dump nearby, the population is accustomed to recycling.

Local authorities are also aware of this "swamp". But they take no action. We are getting used to the rats playing and the smell of this garbage heap.

Poor landscape on the streets due to garbage is often associated with the illiteracy of the population. True, deliberately disposing of garbage at someone's disposal area is one of the worst forms of civilization. But what do people do if there are no waste boxes? Does he put the trash in his bag and throw it in the ditch? If this is the case in the capital, what can we expect from the provinces ?