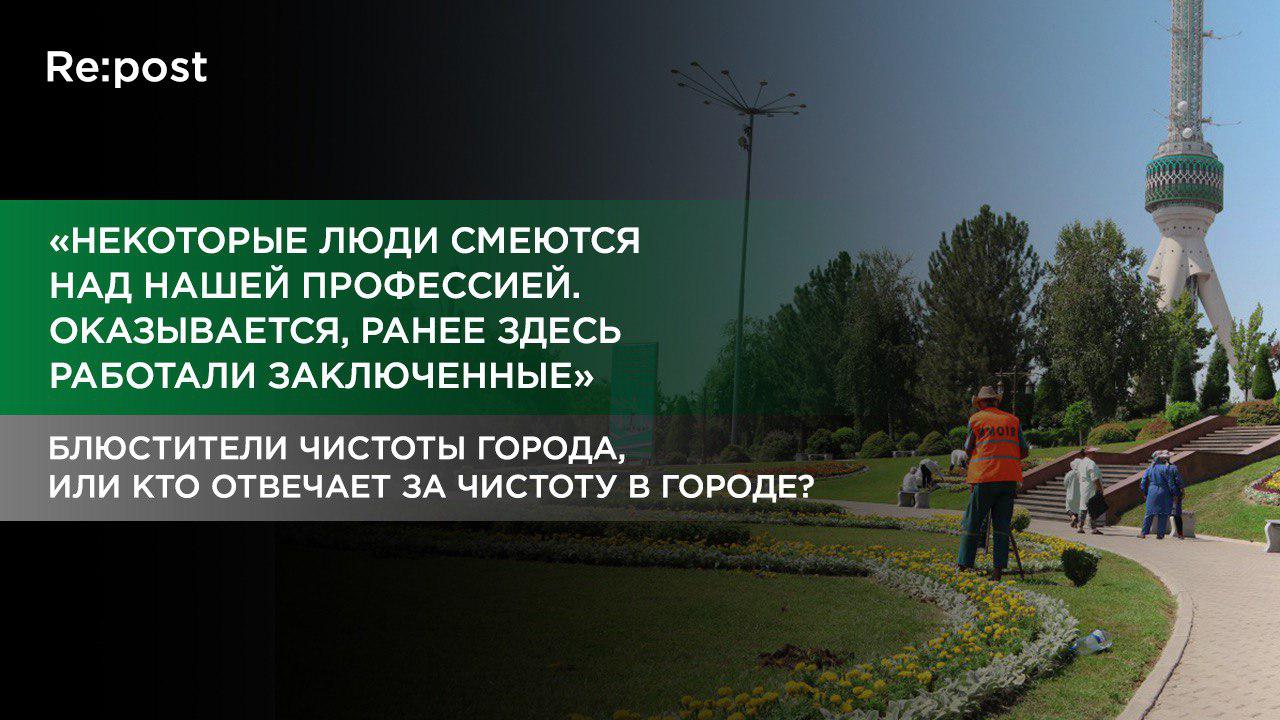 Who are the guardians of purity?

Have you ever thought about who is cleaning your city? And who constantly cleans garbage bins in the streets? Or who is planting and watering plants along the roads?

Surely, many do not notice people in orange vests, which are daily engaged in the improvement of the city. These people are not very noticeable, but we see them every day. It is not easy to imagine how hard these people do on a daily basis.

The General Directorate of Beautification of the city of Tashkent employs more than ten thousand employees, including superiors, accountants, designers and so on. The whole structure is clearly distributed and each department has its own tasks. For example, one unit is engaged in irrigation and landscaping, while the other is landscaping the central areas.

The capital's beautification department is so competently distributed that every employee knows his responsibilities and no one tells anyone what to do. Concrete people and teams work in a certain area. In addition to the regional units, special forces come to their aid, also involved in the beautification of certain places.

Young girls designers work in the Main Department for Improvement of Tashkent, who create drawings of the facades of the entire city. It is according to their drawings that flowers are planted.

In addition to them, there are dispatchers who respond to urgent calls. According to the deputy manager of beautification of Tashkent Khushnud Yakubov, employees of the central emergency dispatch service come to the aid of other structures. For example, they eliminate trees broken from the wind, roofs falling off, fallen poles and the like.

Often people have a negative attitude towards people in “orange vests”. Many consider them uneducated and disdain them, just because they are doing "dirty" work. And who actually creates this dirt?

People mainly pollute the environment themselves, without even thinking. Unscrupulous citizens even manage to throw garbage past the urn that stands next to them.

According to one of the gardening employees Mukaddas Baymakhanova, there are people who throw all kinds of rubbish past the bins and say that for his picking up workers get paid, but there are those who ask where to throw.

It is important to understand that the employees of the beautification structure are the same people as all of us, and thanks to them, the city remains clean and well-groomed. Have you noticed that every morning all the bins in the city are mostly empty or half empty? So, it is these people who empty all the containers and clean up the trash for us. And who should despise whom?

Some people laugh at our profession. It turns out that prisoners worked here earlier. They asked us if we were in prison or came as assistants. But we replied that we had been working here for a long time. When we started going on business trips, these same people began to understand that we had nothing to do with crimes. Neighbors sometimes even envy our work, as we often go on business trips and on vacations, ”says Jamil Payziev, an employee of the Main Department of Public Services at the capital’s khokimiyat.

Most of us believe that the structure of landscaping includes people of a low social level who have served time in prison or are illiterate. But each employee has his own story and his own reasons to work in this organization.

I sat at home and a neighbor told me that employees are required in the improvement structure, after which I decided to work here. My work day starts at eight in the morning with washing marble. Then I sweep the streets and clean up the trash. When people thank me for the work done, it is very nice, ”says Mukaddas Baymakhanova.

She is most upset by the people who throw bread in the ballot boxes. She believes that everyone should buy it within their normal range so that there is less food waste.

I used to work in school in primary school, then my friend suggested I get a job here and plant flowers. For the past 10 years, here. In her work she enjoys dealing with flowers and being outdoors. The weather never bothered us, not even the heat. We have a working schedule from eight in the morning until four in the evening. Sometimes, when we do not have time to finish work on time due to the heat, we ask the authorities to start work from four in the evening, when it is cooler. My monthly salary is 1.5 million soums. My adults and children themselves earn, so I have enough of this money, ”said Mukhtabar Abdullaeva.

According to her, they are given a ticket to the sanatorium once a year for free and twice a year they go to the mountains with colleagues, all these expenses are covered by the authorities. In addition, the interlocutor noted that many employees value their profession because